Every winemaker has a different story, just like every wine they make. What impresses us most about the winemakers that we meet is the passion that they have for the land, the grapes, and the wine. I can”t remember a winemaker that we have met that doesn”t grow or hasn”t grown their own fruit, so their care for wine covers the entire lifecycle.

We have known Don Pullum for several months through Twitter and the #TxWine Twitter Tuesdays, but I haven”t really paid much attention or connected all the dots to understand his impact on Texas wine. His Twitter “handle” is @akashicvineyard, but I hadn”t heard of the vineyard, and he never mentioned owning a winery – but he sure talked a lot about Sandstone Cellars wines. Yes, I can be pretty dense sometimes.

Julie and I met Don face to face a few weeks ago at the Hilmy Cellars grand opening – he had visited Hilmy before the opening and mentioned it, so we asked if he planned to return for the opening. Fortunately for us, he coordinated a second visit while Russ Kane was also visiting at HIlmy and signing his new book, the Wineslinger Chronicles.

Coincidental to that, the following week I attended a business dinner at Pappas Brothers Steakhouse in Houston and noticed that they serve the Sandstone Cellars 2009 VII, a 100% Touriga Nacional wine that Don crafted for them. I tweeted about it and received various responses, some warning me that it was too “tanniny” unless opened, decanted, and allowed to breathe; and some telling me to “go for it”. The latter tweet was from Don, of course.

The “09 Touriga was very, very good. It had strong tannins, yet a wonderfully balanced body and a complexity that I didn”t expect – a great pairing with the medium rare Kobe Filet I ordered. 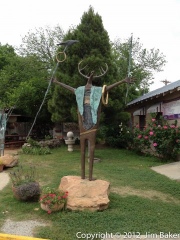 When Julie and I met Don at Hilmy Cellars, we bounced around spending some time with him next time we were “in the area”, so I contacted him before this trip to see if he would be available and was delighted when he responded that he would. On Saturday we headed north from Fredericksburg to meet him at Sandstone Cellars in Mason.

We had planned on spending as much time with Don as he could stand; we love to hear their stories, what path online casino gids they took to becoming a grape grower or winemaker, their philosophy and approach to growing and fermenting. So when we met at Sandstone I told him, “We are at your disposal the whole day.” 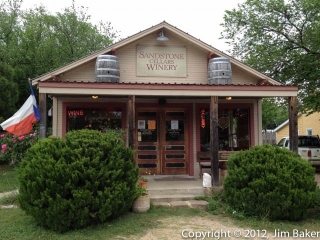 “Good! Let me tell you why you”re here.” Don proceeded to tell us that Sandstone Cellars in Mason, Junction Rivers Winery in Junction, and three wineries-in-progress in Pontotoc are forming a new wine trail in Texas. Our journey for Saturday was to visit all three locations and then to tell you, our fellow Texas Wine Geeks, all about it.

The new trail hasn”t been named yet, but they would like to find a title to highlight the notable features of their locations. Mason County is called the Jewel of the Hill Country as it is the only location in Texas where the state gem stone, the Topaz, is mined. Pontotoc is called the Heart of Texas because it is located in the geographic center of Texas, and Junction is known as a mecca for outdoor lovers.

Don explained that the wineries” locations relative to each other make the trail an easy drive for visitors – the wineries create a nice arc from the southwest in Junction, closer to San Antonio, to the northeast in Pontotoc, closer to Austin. If you start at Junction, Sandstone Cellars is less than an hour to the north-northeast on 377, and Pontotoc is another forty minutes past Sandstone. Between the three cities are miles of beautiful landscape and foliage. I was particularly fascinated by the change from Junction to Mason – limestone mesas and caliche to granite and gneiss outcroppings to sandstone hills as we approached Mason. The roadsides are full of wildflowers – bluebonnets were in full bloom with indian paintbrushes.

Since we met Don at Sandstone Cellars, the middle of the new trail, we decided to head to Pontotoc first, then double back later to head to Junction. 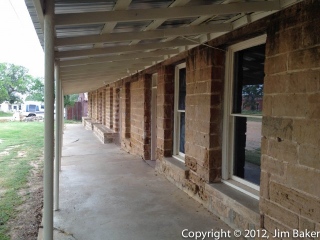 The three wineries opening will be Pontotoc Vineyards Winery, Dotson-Cervantes, and Don”s own winery, as yet unnamed. Carl and Frances Money, the owners of Pontotoc Vineyards, are renovating a building on part of the vineyard property facing the street that will house the tasting rooms for all three wineries when they open. At the end of this building is an old movie theater, also being renovated, to house live performances and movies – another draw to the facility. 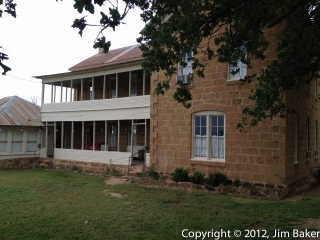 Another building on the vineyard property was constructed by the German Immigration Company to house families relocating from Germany to Texas. They would put an entire family in one of the rooms while they helped them procure land in the area on which to settle. The balcony overlooks the vineyard and would be perfect for a bed and breakfast (hint hint).

Don is the winemaker for Pontotoc Vineyards Winery, and he let us barrel-taste tthe Tempranillo grown at the vineyard, a Tempranillo and Cabernet Sauvignon blend, and a Tempranillo / Cabernet Franc blend. All of them already demonstrate the smooth tannin balance we have noticed in Don”s other wines. 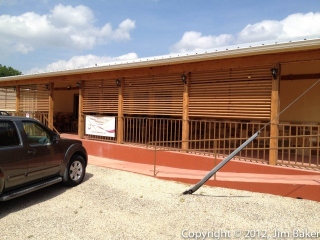 Our next stop took us back through Mason and southwest to Junction, the home of Junction Rivers winery.

Jeanie and Joe King, the proprietors of Junction Rivers Winery, welcomed us and started pouring their wines – the topic of another article to come. We sat with Don, tasted new wines in the barrel, and talked about the plans for the trail opening, and here are the details we have so far: 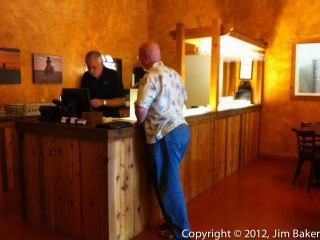 The new trail will officially “open” in October, 2012 with the simultaneous opening of Pontotoc Vineyards Winery and the release of wines at Sandstone Cellars and Junction Rivers. Cervantes-Dotson will open in Pontotoc during 2013 and Don”s new winery will open sometime in 2014. There are still many details to work out, but if at all possible, we will be there to cover the opening with live tweets, photos, and blogs.